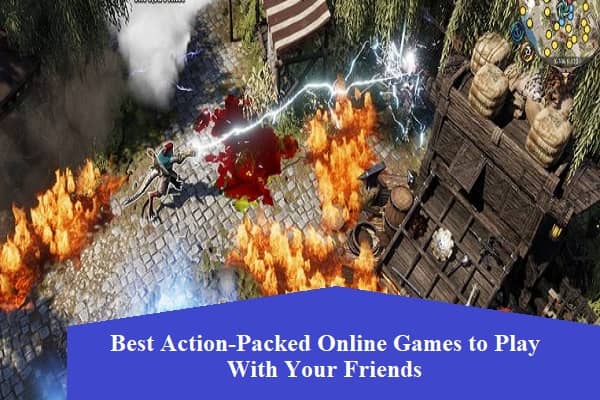 Online gaming has grown from a trend associated only with children to an exciting industry with numerous benefits for everyone, even adults. It has become a fun and enriching part of many people’s daily lives. The benefits of multiplayer online gaming include socializing with people from other countries, improved brain memory, analytical skills adoption, and relaxation.

Modern gaming has improved tremendously; you can play on your smartphone, tablet, PC, or console. This article lists the best action-packed online games to ensure the weekends are full of exciting adventures.

Modern gaming is synonymous with top-notch graphics to the point where some players have admitted to feeling immersed in the alternate universe. Below are some of the top multiplayer online games to play with friends and strangers worldwide.

Did you grow up playing bank robbery games with your childhood friends? Or maybe you enjoy a good thriller whose villain manages a successful heist? Either way, Grand Theft Auto Online is your best chance at enacting what many players assume to be the perfect heist.

Grand Theft Auto Online is a popular online multiplayer game developed by Rockstar North. The game is designed to allow up to 32 players per session who can explore its open world, participating in collaborative and competitive settings. The game is based in a fictional US state, San Andreas, which features Los Santos and open countryside.

Players are allowed to select a customizable silent protagonist whose goal is to become a powerful criminal. As the narrative plays out, the players endure increasingly difficult tasks. Successfully completing these challenges and missions, including heists, helps them build and expand their empire.

As the name suggests, Sea of Thieves is a thrilling adventure game that takes players on a voyage across the sea. The game immerses players into its open sea world, where they sail on a pirate ship and can collaborate with three other players to fight off enemy ships. Each player explores the game from a first-person perspective while enjoying a new experience every time they begin a session.

Although this game was initially conceived in 2014, it was finally published in March 2018 by Microsoft Studios. Critics had mixed reviews; they praised the multiplayer features and excellent visuals but were unsatisfied with the gameplay and lack of content. However, after numerous updates, the game had attracted more than 25 million players by the end of 2021.

Left 4 Dead 2 is a shooting game released in 2009 and the sequel to Left 4 Dead, which had made its debut one year earlier. It is a single and multiplayer apocalyptic game you can enjoy online with friends and anonymous players. The game is played in first-person, set in the aftermath of a pandemic, and focuses on collaborative gameplay among four survivors fighting against aggressive and psychotic zombies.

The gameplay progressively becomes more challenging as the players fight through the campaigns and checkpoints. Each player is allowed to carry one item from the following categories: primary, secondary, and throwable weapons, and major and minor medical supplies, to improve their survival chances.

Also read: The Most Valuable Board Games Ever Made

True fans of the Mario franchise never miss an opportunity to enjoy the latest production. If you’re new to this fad, you will enjoy playing Mario Kart 8, a kart racing game developed by Nintendo in 2014. Soon after its release, it became the best-selling game available on consoles as fans loved it for its simplicity and age-appropriateness.

Mario Kart 8 is a single and multiplayer game that introduces players to anti-gravity driving (on walls and ceilings) and allows short energy boosts when the cars bump into each other. Although the battle mode is limited, you’ll enjoy the numerous tracks, gameplay, graphics, and soundtrack.

One of the best parts of modern gaming is that you can play with whomever from wherever at any time of day. Unfortunately, some countries are usually barred from accessing these gaming platforms due to geographic restrictions. Instead of missing out on new and exciting challenges, you can use a residential proxy from a supported region to ensure you and your newfound friends stay connected!