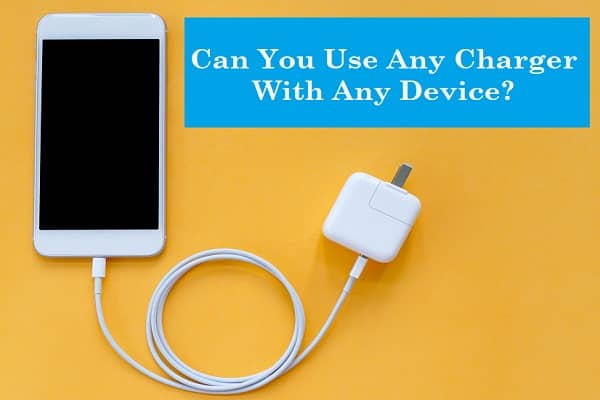 The battery life of your smartphone is just as great as the maintenance you give it. Poor charging behaviours are prevalent, and while your phone’s handbook provides charging advice, you must read it to comprehend them.

There are applications for anything you can think of, both first-party and third-party. Some are fantastic and deliver exactly what you anticipate, while others are subpar or plain frauds. Some applications promise to charge your device more quickly. Is this true or false? The solution isn’t as simple as that.

Does it matter which charger you use, other than matching it to your phone’s connector (mostly Lightning or USB-C nowadays)? Some chargers are quicker than others, while some are less expensive.

Different types of chargers for your devices

While chargers are becoming more standardised over time, there are still several charger types in widespread use:

Sadly, there is no universal laptop charger. You should acquire a charger made exclusively for your laptop. Because connectors aren’t standardised, you’re unlikely to unintentionally insert the incorrect charger into your computer. However, with the arrival of USB Type-C (see below), this is steadily changing.

For so many years, this has been the “standard,” and many tablets and smartphones utilise standard Micro-USB connections. These superseded the Mini-USB connections that existed before them, as well as the custom chargers that were previously used by ancient cell phones. Apple provides a Lightning-to-Micro-USB converter to meet European Union requirements on a standard kind of smartphone charger.

This is the most recent standard to emerge, and it is simply the progression of Micro-USB. USB Type-C (abbreviated “USB-C”) is a reversible connection with a substantially better data speed and charging rate. It has basically replaced Micro-USB on most new gadgets outside of Apple’s iDevices, & is even becoming a standard.

You almost certainly have gadgets that employ at least a number of them. You already understand which chargers go with particular gadgets, so you’re curious if you can combine and match charging bricks.

Also read: Charge Your Phone, Fast, In Your Car

Will any charger suffice? Not at all.

You may switch to a fast charger, yet it must support your phone in order for it to function properly. Three metrics are used: amperage, voltage, and watts.

Assume you have a charger with 5V/1A. You can acquire a charger with a 5V/2.1A  capacity or a 9V/2A charger to charge more quickly. However, there is a limit. The power that modern smartphone batteries can withstand is limited. However, if you use docking stations such as thunderbolt 3 dock, you will have the best results.

What to stay away from

Avoid using inexpensive, uncertified cables or adapters. They can overcharge your battery and limit its life, and the fire dangers can cause property damage or harm. They are cheaply constructed and often do not support the smart & safety mechanisms included in higher-end chargers.

What to search for

While certain OEM chargers might be costly, other companies provide dependable alternatives. All these charging adapters & cables used for Apple Devices should have MFi certification. MFi certification, which stands for Manufactured for iPhone, iPod or iPad, confirms that certain third-party items have been certified by Apple.

So, can you use any charger with any device?

The quick answer is: very likely. However, the consequences may vary.

Most contemporary cell phones are capable of accepting significantly quicker chargers. Laptops, on the other hand, are frequently a different story. We won’t use anything other than the OEM charger if it has a unique charging connector.

The majority of the time, the response will be “yes.” A smartphone charger will be extremely low power for a computer, but it might be capable of charging it when the computer is on standby. However, you’ll have to verify this. It will not harm your device if it does not operate.

You may, on the other hand, charge your smartphone using your USB-C laptop charger.