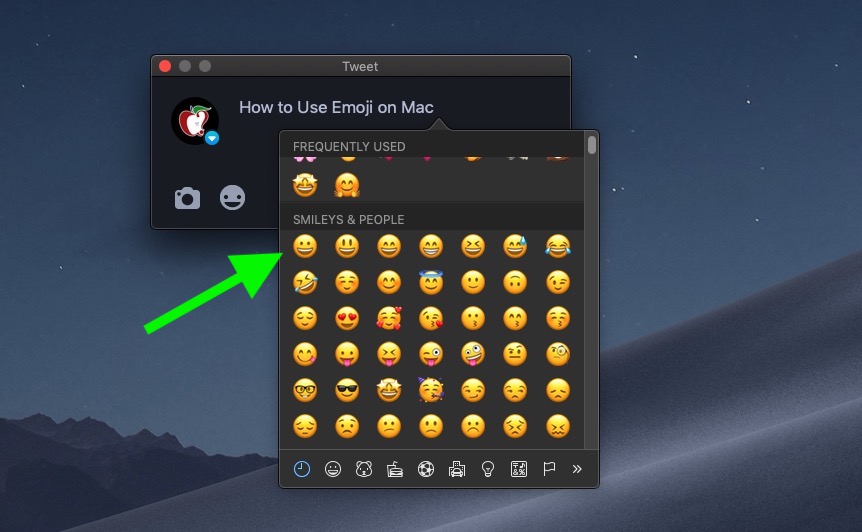 Emojis have become a language in and of themselves. No longer do we need to type out full messages, or even words much of the time. Instead, most people understand what you are saying when you leave a smiley face, thumbs-up, or cheeseburger emoji.

Are you jealous of everyone who can figure out how to use emojis everywhere they type? It’s not that hard but takes just a little know-how.

Most people find it easy on their smartphones, as Apple and Android phones include an emoji button right on the keyboard. Wondering how to use emojis on mac and other laptop and desktop devices?

Wondering how to use emojis on-demand, anywhere that you are typing? Keep reading to find out.

Emojis are basically digital pictures that can be used in digital communication formats, such as text messages, emails, web pages, and so forth. They express an idea in the form of an image.

You know what they say, right? A picture is worth a thousand words? Today, emojis can save you micro-seconds each time you type. For example, you can send a text message with a picture of a cheeseburger, followed by a question mark.

These two characters can replace the entire sentence, “Do you want to get burgers today?”

They also function as a way to respond to someone without expending any emotional energy. For example, if your friend is sending you dozens of lengthy messages about how bad her day is going, but you are on vacation having the time of your life, you can simply respond with sad face emojis.

In some ways, it’s kind of sad. But in other ways, people, especially millennials and younger generations, have come to accept it as reality.

Why Doesn’t the Keyboard Have Emoji Keys?

So why doesn’t a mac computer keyboard come with emojis as the iPhone does?

Well, quite frankly, they aren’t as important on a computer as they are on mobile devices. MacBook keyboards have very limited space and need to include the most essential keys for typing.

Most keyboards are used for formal communication, such as typing emails or completing work, such as writing, accounting, research, or programming.

To add emoji keys to a keyboard would mean removing valuable and important functionality. But, what’s great is that you can use the mac keyboard to open the emojis menu, giving you free rein to select and use any emoji at any time.

How to Use Emojis on Mac

Using emojis on a mac is one of the great modern mac computer tips. Most people don’t need to know how to create their own keyboard shortcuts or switch between browsers or programs.

Rather, they just want to type smiley faces and pizza icons. Wondering how to get emojis on mac?

All you have to do is hold the “control” key, then hold the “command” key, and then press the space bar. Right in your word processor or web page, you should see an emoji menu, almost identical to the one on your iPhone, pop up.

You can now click to insert any emoji you desire.

There are some limitations when using emojis from your computer. Not all applications, websites, or devices are capable of processing them.

They were originally intended to be sent from iPhone to iPhone. In the past, when sending emojis from an iPhone to a non-apple device, it would show up as blank or a random string of nonsense characters, rather than show the image.

Today, some devices are able to send emojis across platforms, but not all.

On top of that, some websites won’t be able to process emojis. For example, leaving a product review on a website, or sending a message on a contact page might not work either.

Many website providers allow the use of emojis on webpages, while some can crash when emojis are used.

So there are certain places where they can’t be used. But if you stick to using emojis in emails, social media messages, text messages, and so forth, you shouldn’t run into any problems.

When to Use Emojis (and When Not to)

Millennials and younger generations have now grown up using smartphones. As we enter the adult world, we are bringing with us the expectation that we can use emojis anywhere and everywhere.

When Not to Use Emojis

Are you applying for a job, creating a resume, or communicating with potential employers? This is probably a bad time to use emojis, even when responding to text messages.

Your goal is to convey professionalism and maturity. Don’t blow your career over something as silly as an emoji.

Also, when communicating with anyone over serious matters, it’s best to avoid emojis as they can be taken the wrong way or interfere with the issue at hand.

Examples could include working with a realtor or mortgage lender to get approved to buy a home. Or it could be a foster parent communicating with a caseworker or lawyer about matters that affect a child’s life.

Basically, use emojis in communication that is casual, light-hearted, and unprofessional by nature.

When to Use Emojis

Once you are comfortably established at a new job and you understand the norms and expectations of your company, using emojis might be acceptable. You might stick to only using them when communicating with other people at your office.

Though some companies encourage staff to use emojis when communicating with customers as well. It all depends on the type of company and the culture that exists there.

If I were reaching out to a law firm or a funeral home, I would be a little weirded out if they responded using emojis. But if I order a pizza or contact a skateboard shop, I’d be happy to see them communicating in a fun, casual way.

Now that you know how to use emojis on mac computers, you have no reason to spend so much time typing out full sentences. Often, a combination of one or two emojis can communicate an entire idea.

Just don’t get into any trouble by using emojis at the wrong time. Looking for more helpful articles like this? You can check out more on our blog today.